This exercise was part of the Masterclass given in April 2018.

This exercise uses an existing course-layout called: the Hitch. See the map of the course which is added. Ride the course several times until you’re familiar with the course. 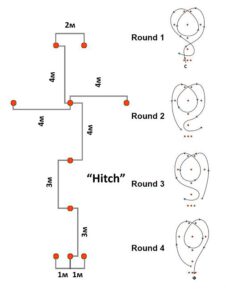 You can use this course to train several aspects, but the empasis of this exersise is: lean angle training. Due to the several different circle diameters and speeds are you able to train and vary different lean angles.

Explanation:
Leaving the startbox, you round the first cone on you right, but from there all the next corners are left ones, all the way until you again reach cone one.
Closing in on cone one you have to do a fast switch to the right for a thight recht rotation. From there on all the corners are right-hand ones, until you (again) reach cone one.

Directions:
Try riding the course as 1 gaint bent. From cone one to the next until you reach cone one, your bike should be leaned-over all the time. Don’t let it stand straight-up for a second. Try to aim for a 100% leaned over bike all the time but at different lean-angles.
Focus specifically on these 2 points:
1: Switching over from left to right at cone 1. You are throwing you bike over, but after having thrown it on the other side, your aim and goal should be to directly reach maximum lean-angle. Aim is to exit cone one with the same lean-angle as the which you had when aproaching cone 1.
2: The other focus point is when exiting the gate when leaving the centre-cone. This is a point where your bike is relatively straight-up to fit through the gate. However leaving the gate it again is an aim to fall into the corner and reach maximum lean-angle as fast as possible.

At the 2 points specified above it should be possible to actually hear your engine-speed rev up considerably due to the acceleration you get from falling into the corner. Getting that speed and control is great and a real aim for this training.